Finally, this bottle arrived at my Costco.  I know several of you have found it already and posted a few things on the forums indicating potentially positive things about this year’s vintage.  The Kirkland Chateauneuf is always one of the wines I look forward to reviewing most every year, and this year it came with a huge surprise.

A 10% price reduction, only $17.99, from the usual $19.99.  Only a few bucks I know, but it’s making this wine more accessible than ever, so I commend Costco on that move.  It’s now a Chateauneuf that’s priced like a Cotes du Rhone that you would buy elsewhere.

I’ve been tracking this wine for quite a while now, 8 vintages in fact, the highlight still being that amazing 2013 vintage that I wish I had squirreled away in the cellar to open now.

As you can see, since that 2013 vintage, I’ve turned less favorable on this wine, although it has still remained very nice; I’ve landed in the high 80s, vs low 90s.

My notes this year track pretty similar to my feelings about the 2015 vintage.  The wine pours a light purple and is medium in body; aromas are dried fruit and earth, a little perfume; flavors are cherry dominate, a touch sour, and black cherry; slight vanilla and cedar notes as well; peppery finish that’s spicy and super dry.

I poured the wine in a decanter and let it sit for an hour in order to see how it might develop.  The wine did round out a bit, developing a little more elegance and finesse, which it likely  might build on with a few more years of bottle age. 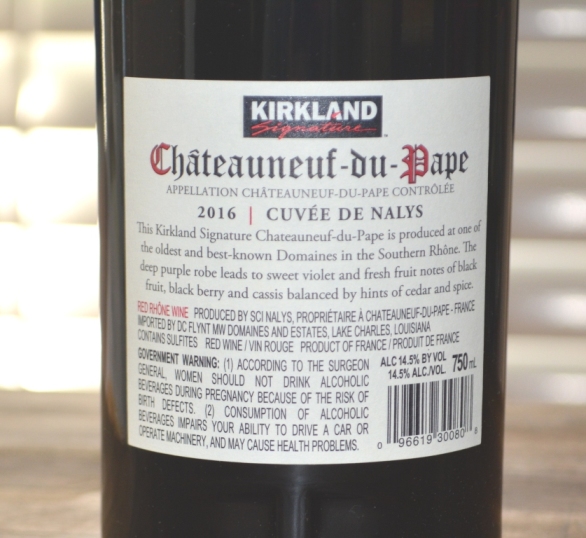 I feel this is year’s vintage, while similar in many ways to the previous two, is a slight step up, a bit more elegant, and the finish is a clear highlight.  The wine lingers, and is super pleasant all around.  It probably didn’t hurt that I threw a couple thick grass fed NY strips on the Big Green Egg to eat alongside the wine [more on the steaks below for any Egg Heads reading this].

So I’m going 90 points, especially if you consider the bonus $2 price reduction, putting an already inexpensive Chateauneuf at an even more attractive price point.

Bonus: How to Cook The Perfect Steak on the Big Green Egg 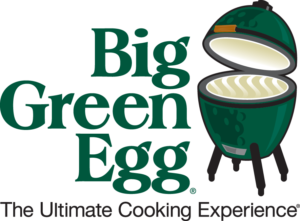 I’ve been thinking about a post here and there on Green Egg cooking, as I am almost as obsessed with it as I am about Costco wine.  Plus the two go together nicely, as is the case today.

My method of cooking steaks on the Egg is as follows.  Clean the Egg as best you can and make sure the inner ceramic rings are centered and that all the airholes are open.  I take a screwdriver and stick it in each hole just to make sure no small pieces of charcoal are stuck up in there that might prevent air flow.

The key here is the get the highest temperature possible, and air flow is your best friend.  Next open the bottom vent up all the way (no screen, unless you’re on a wood deck then you might want to watch for sparks), and open the top all the way.  Light the fire, wait for it to calm down, then drop the lid.

When cooking steaks I don’t use anything other than the lump charcoal (and I use Royal Oak brand, which is who I heard produces the Green Egg brand of charcoal, but you can get it much cheaper).  I don’t add extra wood for steaks as I’ve had a few just get too smoky.  I save the wood for when I’m cooking a pork butt, ribs or brisket.

Take your steaks out at least an hour before you plan to cook so they come up to room temperature.  I prefer grass fed NY or Ribeye as the marbling and fat really makes for a juicy bite with a nice crust on the outside, as evidenced here.  I put Himalayan sea salt on the steaks while they’re resting, and that’s it.  If you buy a good cut of meat, you really don’t need anything else.

Now, pour a glass of wine and watch the temperature on the Egg climb.  You want to get it up to 650+ if you can.  I was able to push it to 775 which is awesome. 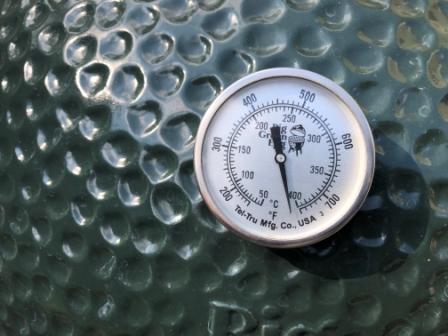 You might want to invest in some good grill gloves when you’re playing with heat this high.  Here are the ones I use.  I can even pick up a hot ceramic plate setter from inside the Egg with these gloves to switch between indirect and direct cooking, so they are super handy to have around.

Once you get the temp as high as you can, “burp” the Egg by lifting it up a few inches so the high heat can dissipate; otherwise you might get hit with a blast of heat and it will singe your hair.  Throw the steaks right in the center and a little towards the back (Eggs are usually a touch hotter in the back center), on the hottest part and close the lid.  Set a timer.

For steaks less than an inch thick, this won’t take long, maybe even just a minute on each side for medium rare.  The steaks I used here were 1.75 inches thick, so I went 2:20 on each side.  This is a moving target but you want the internal temp around 130 for medium rare when you pull it (it will likely rise 5-7 degrees in the foil in the next step).  Obviously, increase the time if you want to go more of a Medium or Medium Well.

Now, immediately after pulling the steaks, wrap them in aluminum foil for about 10 minutes.  The foil will be extremely hot, and that’s what you want as they will continue cooking while inside the foil.  At this point you should have a nice crust on the steaks and the center will remain moist and juicy for when you cut into it.

If in doubt, always undercook because you can always throw it back on but can’t un-cook it.

After 10 minutes of rest, unwrap the steak and enjoy.

It should look like this one, which turned out perfectly for me.  And what a pairing with this Chateauneuf du Pape.  Let me know if you enjoyed this extra little story about Green Egg cooking, and I’ll know whether there’s enough interest to write some more down the line. 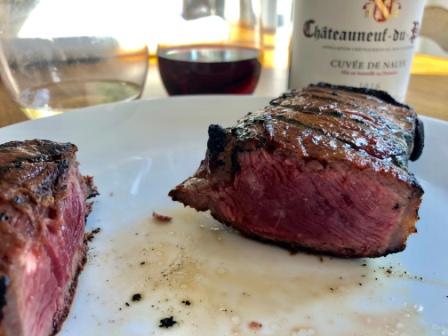 My medium rare NY Strip from the Green Egg paired with the Kirkland Chateauneuf.

Have you ever considered a regional network of Costco "scouts"? So disappointed to see this, then find out it was "deleted" all over the mid-Atlantic about 2 weeks ago. Regional inventory is so weird with Costco. Fully 50% of your reviews are nowhere to be found in my Costco(s).

Yes absolutely. That is the idea behind launching the forums. So people can share what they see around them with everyone. Still early in the forum game but I hope more people log in and use them as it would benefit the whole community here.

Loved the BGE edition. You do almost exactly what I do on a night like tonight!

Thanks. I’ll have to incorporate some more BGE posts. Love talking about it and such a great group of people online with a similar passion.

It’s the Kirkland “unicorns” like the 2010 Brunello and 2013 CdP that keep me on a constant lookout for great Kirkland wines. Once that bar is set high, it’s hard not to be disappointed even when a wine is decent, which is the case for me here. Nothing to get excited about, but a fair value at $18.

Enjoyed the green egg post. Pairings and recipes for them are a great idea. I love wine and I love food, and I love reading about wine and food so yeah, keep ‘em coming!

Cool. Thanks for the feedback. Sounds like we’re on the same page.