First off, a big shout out to one of our readers, Richard S, who wrote in to alert us to this wine, dropping at Costco for only $13.79, from a retail price that I see around $20 online.

After receiving his email I was heading for a little wine shopping and was pleasantly surprised to find the bottle at my Costco, and bring you this review.

Right away, you’ll notice the weight of the bottle on this one.  I actually weighed it, and the bottle and wine inside weighed in a little over four pounds.  Normally a full bottle of wine weighs less three pounds, so there’s a little extra heft to this package.

Ripasso is a wine that always interests me too, in that many are very good as they have that reputation and taste profile of being a baby Amarone.  That’s because they are a “re-pass” of the pressing of dried Amarone grape skins.  To that extent, you’re getting a lighter dose of the residual greatness of the more expensive and exclusive Amarone grapes at a much better price. 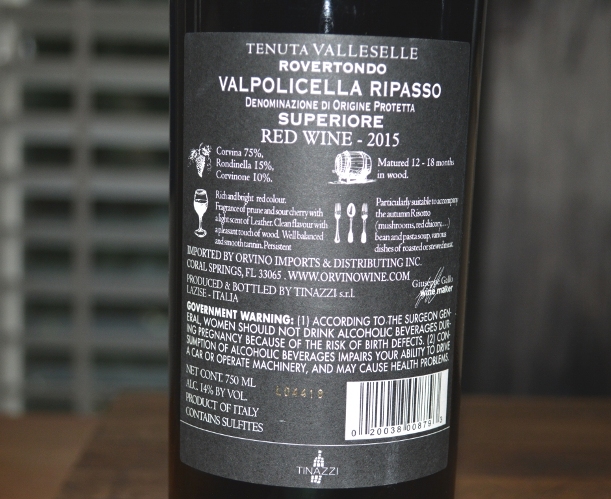 So let’s get into it and see what we’ve got.

The wine pours a light red, slightly see through in the glass; it kind of looks, and even smells like a Pinot; old world aromas with some spice; medium in body, nice mouthfeel, playful and light; flavors of Dr. Pepper, cola, sour cherry with a little bell pepper, vegetal components; finish is ok, on the dry side, maybe a little quick.

The wine is a blend of 75% Corvina, 15% Rondinella and 10% Corvinone.  Overall, this is a nice, versatile red wine at a great price.  Given the massive size and weight to the bottle, along with its good tastes, I could see this being an impressive wine to bring to a party; the presentation is great and you don’t have to spend an arm and a leg.

Thanks again to Richard for sharing this one with us.

Share your opinion and see what others have to say about this and other wines we review in the Costco Wine Blog Forums.